PERSPECTIVE — An eight-year hiatus from a significant solo tour in the U.S. is unprecedented for pianist Leif Ove Andsnes, who has been performing regularly on some of America’s most important stages since he was 20. “I’ve spent a few weeks every year in the States,” he said in an interview, “so it has become part of life, and I’m always looking forward to those trips.”

Like virtually every other performing artist, Andsnes saw his life upended in 2020 with the COVID-19 shutdown. In fact, because an injury forced him to cancel a 2019 visit, the pianist is now set to embark on his first major North American recital tour since 2015. (He did perform a short series of solo appearances in 2018 and returned to the U.S. in 2022 for a couple of sets of orchestral concerts.) His nine-concert itinerary begins Jan. 19 in La Jolla, Calif., includes stops in Chicago, Atlanta, and Toronto, and concludes Jan. 31 at New York’s Carnegie Hall. All of the cities are ones where he has appeared previously except for Denver, where he will appear for the first time Jan. 23 at the Newman Center for the Performing Arts under the auspices of the city’s Friends of Chamber Music.

For the past decade, much of Andsnes’ time has been devoted to two large-scale, acclaimed projects, starting with The Beethoven Journey in 2012-15. It included an award-winning recording of the composer’s five piano concerts with the Berlin-based Mahler Chamber Orchestra and more than 230 performances in 27 countries. Starting in 2019 and continuing through last year, he followed that undertaking with Mozart Momentum 1785/1786, zeroing in on two pivotal years of Mozart’s career in Vienna. Much as he did in his earlier project, he paired performances with a two-volume recording of all the piano concertos the composer wrote during those two years, a set of releases with the Mahler Chamber Orchestra that won him a Gramophone special achievement award last year.

“Life goes on after winning an award,” Andsnes said, “but it’s an acknowledgement. And I was very happy about that one, because we got it for the entire project, which had two recordings involved in it — two double CDs. It’s been a special time and special project which had also many challenges because of the pandemic and everything. We were happy to do some tours and especially happy to be able to do those recordings.”

Andsnes, 52, won his seventh Gramophone Award in 2022. The Norwegian pianist first came to widespread attention in 1998, when he won the Gilmore Artist Award, a $300,000 prize given to a top international pianist every four years, and other major honors have flowed since.

The pianist and the Mahler Chamber Orchestra are in talks about what might come next. Andsnes acknowledged that he likes to focus on one composer, and his recent recording for Sony Classical zeroes in on a little-known work by Dvořák — Poetic Tone Pictures. The set of 13 miniatures, composed over seven weeks in 1889, is the most substantial of the Czech composer’s piano collections, lasting nearly an hour, and Andsnes it on 25 recitals this season, including all the concerts in his current U.S. tour. “His piano music is really not known anymore,” he said of Dvořák, “and I’m happy about championing that cycle, which I think is a totally forgotten, absolute jewel from the 19th century.”

Andsnes has known selections from the Poetic Tone Pictures since he was a child because his father had a recording that included some of them. He played the first of the 13 pieces in a youth competition when he was 12, and later he played a few more of them. “It was in the back of mind that I should look at all of them,” he said.

He read a quote from Dvořák in which the composer said that he had tried to be a musical poet à la Schumann, and that he hoped someone would have the courage to play all 13 of the miniatures as a cycle because only then could the composer’s intentions be fully understood. “I thought that was really interesting because that was a very ambitious undertaking,” Andsnes said. “In the 19th century, you didn’t normally have piano cycles lasting one hour.” When the pandemic took away a large swath of his scheduled performances, he finally had the time to study the full set of pieces.

Nearly all of Dvořák’s early solo piano works carry abstract titles like Six Piano Pieces, but this set takes a more programmatic bent. Each of the pieces has an evocative appellation like “Twilight Way” or “Peasant’s Ballad,” and they cover a wide range of moods, from the romanticism of “Serenade” to the unfettered revelry of “Bacchanal.” “It really makes for a wonderful journey, maybe not coherent as one story but pictures of Bohemian life,” Andsnes said. “And a really contrasting story, everything from high to low — very spiritual pieces, and you have almost trivial titles like “Tittle-Tattle” or “Joking.” So, you have a great mixture, like life itself. I love that about this music.”

While the second half of Andsnes’ recital program is devoted to the Poetic Tone Pictures, the first half is anchored by Czech composer Leoš Janáček’s Piano Sonata 1.X.1905, From the Street. The composer wrote the piece as a tribute to a worker named František Pavlík, who was killed in October 1905 during demonstrations in support of a university in Brno. The pianist described the two-movement piece as “frighteningly relevant” to today, noting, for example, the recent protests in Iran against the treatment of women.

Opening the concert is the Lamento by Russian composer Alexander Vustin, who died at the start of the COVID-19 outbreak. “I was very saddened about that,” Andsnes said. In 2019, the pianist performed this short piece at Norway’s Rosendal Chamber Music Festival, which he directs, with the composer in attendance. Rounding out the program is one of the bagatelles by Ukrainian composer Valentin Silvestrov and one of two works by Beethoven, depending on the venue — the Pathétique Sonata, Op. 13, or Sonata No. 31, Op. 110. 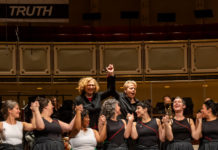