DIGITAL REVIEW — In 2018, queer activist Zak Kostopoulos was beaten to death in Athens, Greece. First civilians attacked him, and then the police finished the job. This tragedy and the complex societal systems that allowed it to happen were the inspiration for the opera Orfeas21 by the creative duo FYTA. The work, a de- and re-construction of Monteverdi’s 1607 opera L’Orfeo, was commissioned as a stage production by the National Theatre of Greece, but the pandemic made it necessary to turn it into a film instead.

Fortunately, FYTA co-founder Fil Ieropoulos is an experienced film editor. In Orfeas21, he has composed a visually arresting symphony of images, with help from animator Margarita Athanasiou. Ieropoulos is also a composer in the musical sense, working with Andriana Minou and Alexandros Drosos to provide new passages that expand Monteverdi’s score in surprising and effective ways, using everything from nationalistic marches and traditional Greek bouzouki music to a lyrical post-tonalism evoking Thomas Adès.

Alessandro Striggio’s original libretto is largely tossed out (what little remains is translated into Greek) and replaced with a new script in Greek by Minou in collaboration with FYTA’s other co-founder, Foivos Dousos. The layers of meaning in the text are as elaborate as the human thought processes and viewpoints it tries to capture.

The concept seems simple on its surface: Greece’s first openly gay prime minister, Orfeas, decides to marry his partner, Euri. In response, unidentified forces beat Euri to death. Orfeas tries to bring his spouse back to life. But this is no simple tale. Countless choices made in the script, music, sets, and costumes turn this piece into an extraordinarily sophisticated social statement. As Ieropoulos explained in an interview published in und.Athens.com, being forced to make a movie ultimately helped the opera: “Working more independently and with far fewer practical limitations, the film is a much more accomplished version of the work.”

Besides writing new material, the compositional team made judicious use of modern technology to enhance Monteverdi’s music. The goddess Logic (the floating head of Elena Akrita) opens the work with her voice digitally separated into multiple timbres, singing against a synthesized basso continuo. She is called Logic (rather than Striggio’s La Musica) as a counterpoint to the Museum of Supernatural History, which stands in for the Underworld. That is where people of undeserved power get to choose the myths that shape humanity’s understanding of what is right and real. Logic cannot enter there.

True to the needs of both early opera and ancient Greek drama, there is a chorus acting as spokesperson. Much of the time, its four members are cabinet ministers, clothed in silver and clear plastic tunics (costumes by Daglara). The blue and silver makeup by Elizabeth Petrou makes them even more futuristic. As mouthpieces of a queer-friendly government quite different from the realities of today’s Greece (as Douros has claimed in interviews), it makes sense for them to be from another time that one can only aspire to.

But Minou and Dousos do the hard work of showing nuances in their script. Act I ends with new material, a lengthy “Revolutionary Interlude,” consisting of spoken word, a group of queer people discussing in the most cynical, hopeless terms their oppression and the useless governmental lip service about protecting their civil rights. They have stopped believing that anything can change; the problems are too ingrained and systemic.

The mortal world — in this case, the re-election headquarters for the prime minister — is presented with a skilled acoustic rendering of Monteverdi’s score. Iason Marmaras and Panos Iliopoulos are credited with providing harpsichord continuo and musical preparation. Their small band of period players, comfortable with 17th-century conventions, could hold up well in the pit of any Monteverdi production.

The vocal contributions are more uneven. As Orfeas, Georgios Iatrou offers a strong baritone that softens when the emotional context requires it. Soprano Lito Messini exudes both power and personable humor as the Minister of Utopia, especially in a newly written solo song in which she advocates for “mature realism” vs fanaticism in “a declaration of proud compromise.” Diamanti Kritsotaki is heartbreak as Euri’s friend Stavio, who brings the news of Euri’s death. As Euri, however, countertenor Antonis Stamopoulos produces a pinched sound through a bafflingly unmoving face. The role is mercifully small.

Electronic alteration is associated with the realms beyond the mortal. Orfeas, whose gift in this version is in rhetoric rather than music, lectures the guard to sleep and then “enters” the museum via a virtual reality device strapped to his face. Endless animated grids interrupted by random baroque objects bring to mind the second half of 2001: A Space Odyssey. The chorus members have become creepy, misshapen caryatids, their voices artificially de-tuned. Monteverdi’s exquisite polyphony is turned into deranged carousel music.

Instead of Pluto/Hades holding Euri’s soul, there is Hellas (Greece) herself, sung by Messini over bouzouki tremolos; her lover Oxi (Kritsotaki), replacing Striggio’s Proserpina, urges Hellas to be merciful. Hellas agrees, but only if Orfeas will not marry. He and Euri can be together but not equal to the rest of society: “They can do what they like in secret.” In another of many insightful moments in the script, Euri refuses to come home with Orfeas, knowing that nothing will change.

As Dousos put it in an email conversation, FYTA chose Monteverdi’s L’Orfeo partly because it combined multiple pre-existing forms to make a whole new genre, an opera. “We were interested in the idea of bringing together incongruous elements, textures, references, histories in our ‘queer’ Orpheus. This is very much in line with our desire to not only queer the content (by including LGBTQ+ themes) but also queering the form.”

Orfeas21 premiered at the Thessaloniki International Film Festival in November 2021. Although I was able to view a streaming video, the general public does not currently have access to it. However, the creators are in talks for further distribution in Europe and North America. It is expected to be shown in 2022 at the Leslie-Lohman Museum of Art in New York and at the Whitechapel Gallery in London. 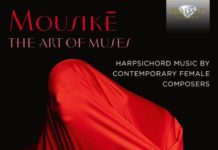